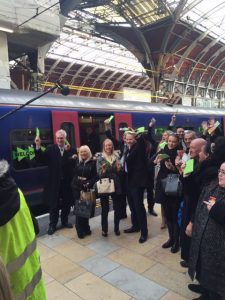 ‘On the right tracks’ – Dreams crowd participants for a commercial.

Here at Dreams agency, we have a wide range of talent registered with us and have a wide range of clients. In 2016 we worked with a Public Relationship’s company to help produce a viral commercial for the National Lottery, where our crowd of staff were on hand to make some noise!

The goal of this campaign was to produce a viral video from a publicity stunt, this video would promote the National Lottery scratch cards – demonstrating that anyone can win.

Hiring a crowd to create atmosphere.

The PR company approached us to hire a crowd of 20 people to help them create a buzz around the commercial and to make it viral in the world of the internet. The task at hand was sourcing a diverse group of people from different demographics to represent the UK population. These crowd members would be catching a public train from Reading to Paddington station where 1 in 4 carriages had a chance to win scratch card prizes and or a cash prize.

The crowd was required to pretend to be members of the public, acting as if they were on their commute to work – once the carriage winner was announced, a band started playing music inside the carriage and the crowd had to set the scene by starting the celebrations. This was filmed by a hidden camera crew, so it was imperative the hired crowd were inconspicuous.

The winning ticket and another successful publicity stunt.

We were proud to be part of this event, where members of the public were surprised with prizes which really made their day! The staff performed in a professional and punctual manor making the event extra special. Finally, the commercial went viral and managed to attract lots of views, making the campaign a great success.